My very first book review! I read tons, but have never before been given a book and asked for my opinion! So here goes…. 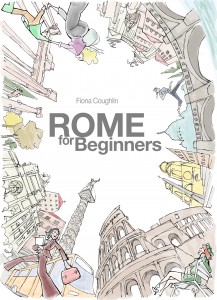 Here is how Amazon.com describes the story…

The girls had read all about living in Italy. The way it worked in all those pink, glossy novels was: woman comes to Italian city. Woman buys farmhouse in Tuscany. Woman’s toilet overflows. Woman has a good cry. Woman achieves self-realization.

As Lilian was learning, living in Italy was no vacation. As a fifty-something academic living in Rome, she didn’t feel any closer to self-realization, and she had bigger problems than plumbing. Her professor ex-husband had just started dating her boss (the Chair of the department), and if that weren’t enough she’s just found herself in an Italian Emergency Room, where the people around her seem “to be speaking some dialect of squirrel”. Language problems won’t hold her back, as she’s got her friends Brennan (an athlete constantly risking deportation), and Suzanne (a newly divorced, single mother) to translate.

This story follows these three unlikely friends in different stages of life over the course of a year: broken bones, dates in the Catacombs, multiple boyfriends named Massimo, spelunking into cavernous Roman ruins, killing one’s own turkey in a country that doesn’t celebrate Thanksgiving, explaining to a nun how adorable one’s own child is after he is expelled, learning how to get some sleep when you’ve rented a room in a church directly under the church bells.

As things get ever more messy these women will discover if they can get it all sorted, with or without all the “ciao bellas”.

Rome for Beginners is skosh heavier than an average Chick Lit book, yet a smidgen lighter than normal Women’s Fiction. Readers who love quirky reading or summer fare, who like satire, who like a biting sense of humor, and who are curious about Italian life should love this book. Lovers of Rome should also love the book, as the city is a character unto itself.

My Review: I’m giving this book 2.5 stars (out of 5).  It took me a few tires to “get into” the book. Once I read a little further, I started to develop a fondness for the characters. There were moments that had me chuckling or rolling my eyes. I saw Rome through their eyes, and it was a unique perspective. And while I did eventually go deep enough in to the book to fall in love with the leading ladies, I found that the story lacked that certain rhythm and finesse that would have made it impossible to put down. The way it seemed to jump all over the place and brought in practically unnecessary characters made it hard to finish. Speaking of finishes… the book didn’t really end… it just sort of drifted off in to being over… I’m not sure if the author (a total sweetheart by the way) was trying to leave it open ended for a sequel, or if she just didn’t know how to end it. If there is a sequel, I’d probably read it, mostly because I’d like to know what happened to the characters I found so charming.

What are you currently reading?