Friends. Oh Friends. Let me tell ya, the past 2 ish weeks have been doozies! And I am more than ready for a break! Would it be wrong of me to tell the Hubs to get up off the couch and do something? Anything?

Wait. Let me back up. 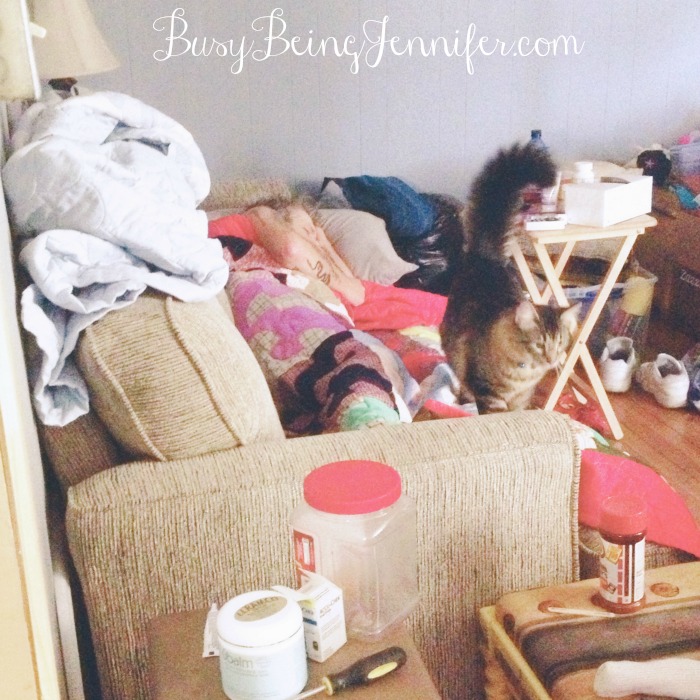 This has been my life for almost 2 weeks   -> Disaster House   -> Hubby sick and camped out on the couch   -> Me stressed and exhausted   -> Life Being overwhelming.

It was almost 2 weeks ago, that the Hubs called me. He’d only just left for another week of work the day before. He was in serious pain {Head, Ears and Jaw} could barely drive and was coming home. He’d already called his boss and made arrangements, I just needed to meet him at the truck yard in a couple of hours and bring him the rest of the way home. 30 minutes later, he was calling to tell me he had stopped and gone to a hospital.

Turns out he had a pretty major double ear infection. Just perfect. The Doc at the hospital gave him a shot , a couple prescriptions and sent him on his way  few hours later. When I finally picked him up he was pale, shaky and definitely not himself. *sad face* Every jolt and bump on the rough Texas back roads was agony on the drive home. After what seemed like the longest 50 minute drive of my life, I finally got him home, relatively comfortable on the couch and medicated.

3.5 days later he’s not any better… in fact his face was more swollen than before. The antibiotics didn’t seem to be working and the pain meds that were prescribed definitely weren’t helping so we made the decision to go see our own doctor. Thank goodness we did! Our doctor was baffled by the medication that had been prescribed to him… turns out is has nothing to do with healing ear infections. Hubby had also been given the lightest dose of pain meds possible… 3 advil pills had more power! To say I was frustrated would be a major understatement!

3.5 days wasted. 3.5 days he should have been healing wasted. Thats 3.5 days he spent in agony getting WORSE, instead of better! Instead of being off work for less than a week, we’re going on 2. That means 2 full weeks without a pay check. Plus additional medical bills. Grrreeeeaaattttt…

To top it all off the my Flare-Up-From-Hell, that was just starting to subside, kicked right back up. I have almost spent as much time in bed, trying to heal, as hubby!

Before you think I’m just gonna whine all through this wordy post, I gotta tell you how thankful I am for my Mother in Law! She’s been amazing, if slightly annoying {LOL}, the past 2 weeks. She’s done our dishes, laundry, errand running and anything else she could do to help. If it hadn’t been for her I wouldn’t have been able to finish the Patchy Bears for the Instagram sale last week! Heck we probably would have run out of clean dishes and starved if not for her!

I’m also thankful for our Doctor. She’s awesome, has taken the time to get to know us both and knew exactly what hubs needed to knock out the infection and get back on his feet!

He’s not quite back on his feet yet… in fact he’s at that rather frustrating point of healing where “you feel better, want to do all the things, but as soon as you get up you realize just how weak you are” stage. I just want him to get off the couch so that I can wash his bedding and spend 10 minutes cleaning the living room! I keep trying to convince him some fresh air will do him a world of good… he just tells me to open a window!