So it would seem that my reading spree took a hiatus! Its been almost 3 months since my last book review! OPPS! That being said, its not as if I stopped reading altogether… I just got busy and it got pushed to the back burner, again. Bummer! I’ve actually got almost 7 books that I need to write reviews for! So expect to see more book reviews over the next few weeks 🙂

I’m starting off with The Reflections of Queen Snow White by David Meredith.

I received a free copy of this book in exchange for my honest thoughts. All opinions are my own. 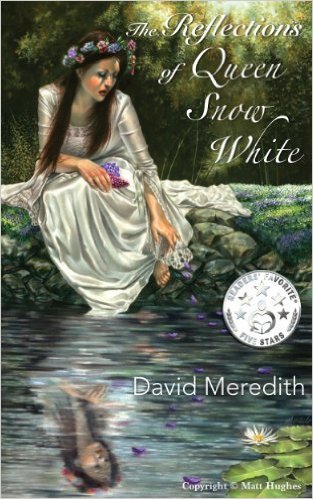 What happens when “happily ever after” has come and gone?

On the eve of her only daughter, Princess Raven’s wedding, an aging Snow White finds it impossible to share in the joyous spirit of the occasion. The ceremony itself promises to be the most glamorous social event of the decade. Snow White’s castle has been meticulously scrubbed, polished and opulently decorated for the celebration. It is already nearly bursting with jubilant guests and merry well-wishers. Prince Edel, Raven’s fiancé, is a fine man from a neighboring kingdom and Snow White’s own domain is prosperous and at peace. Things could not be better, in fact, except for one thing:

The king is dead.

The queen has been in a moribund state of hopeless depression for over a year with no end in sight. It is only when, in a fit of bitter despair, she seeks solitude in the vastness of her own sprawling castle and climbs a long disused and forgotten tower stair that she comes face to face with herself in the very same magic mirror used by her stepmother of old.

It promises her respite in its shimmering depths, but can Snow White trust a device that was so precious to a woman who sought to cause her such irreparable harm? Can she confront the demons of her own difficult past to discover a better future for herself and her family? And finally, can she release her soul-crushing grief and suffocating loneliness to once again discover what “happily ever after” really means?

Only time will tell as she wrestles with her past and is forced to confront The Reflections of Queen Snow White.

My Review: The Reflections of Queen Snow White by David Meredith

I honestly didn’t know if I was going to get through this book. The first several pages are filled with flowery prose full of analogies that made me roll my eyes and want to throw something. Seriously. And while that might feel a tad bit dramatic, I was feeling dramatic so it fit. 😉 I had seriously considered just forgetting this book and moving on to something else. But I hate quitting… so I decided to give it another go.

In the end I’m glad I did. Once I got past the first chapter and the “narrator voice” (and the unneccessary “Big” words, flowery and over-descriptive sections), I got sucked right into the story! And oh what a story it was! I’m a “Happily Ever After” kind of girl, and I love to imagine the lives of my favorite characters, once the story (or movie) ends. This epilogue-like novel gave a unique perspective to what life after Snow White’s “happily ever after” could have been like, and I LOVED it!

While I overall enjoyed this book, it is worth noting that it dives into some dark places (child abuse at the hand of the evil queen, suicidal thoughts, etc) and has a few “love” scenes that skimmed over (so NOT my thing). Some of the scenes and topics could be considered”triggers” so keep that in mind if its an issue for you.

All in all, while I didn’t LOVE the book and can’t imagine re-reading it, I did like it in the end and felt is was worthy of sharing with you all 🙂