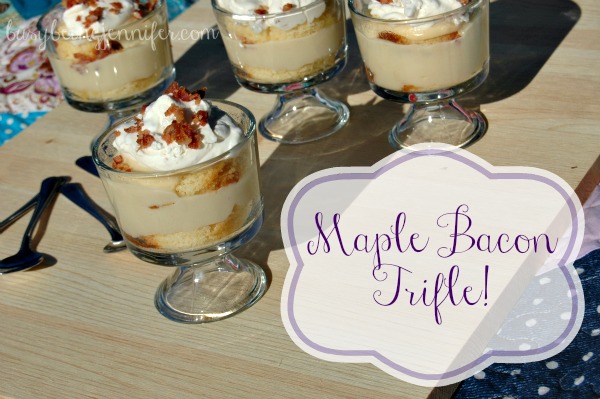 So I’ve had an idea for a delicious recipe in my head for a while. There is something so homey to me about the idea of combining maple and bacon. Probably because I’m from the north. This combination of flavors with just a hint of smokiness from the bacon almost tastes like spring time “back home”! Of course any new recipe requires a shopping trip, so I headed out to my local Walmart to get a few basics, including some Tyson bacon pieces and then I got to work 🙂 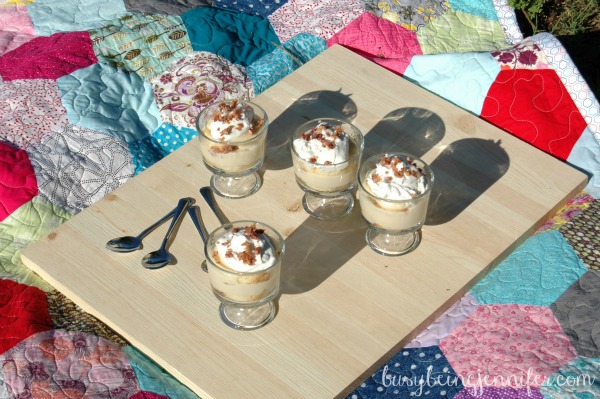 This trifle will serve 4 to 6 and  is composed of layers of maple pudding, maple-bacon whipped cream and vanilla cake. I wanted to keep things somewhat simple, so instead of baking the cake part of this trifle from scratch, I went with a store-bought loaf cake. I also purchased Tyson bacon pieces! They are already cooked and so easy to dice up for the recipe. Everything else I made at home from scratch… and yes I am pretty proud of that fact 🙂 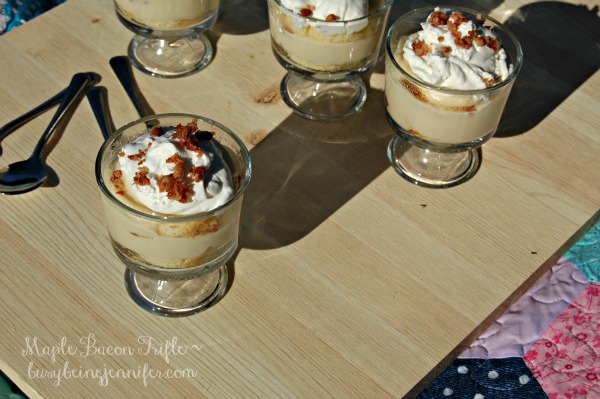 1. Place 1 cup of milk, the cream, the syrup and salt into a medium sized pot and heat until simmering.

2. In a separate bowl, combine the cornstarch, remaining milk and egg yolks. Whisk until well blended.

3. Take approximately a cup of the heated milk/syrup mixture and slowly pour into the egg mixture, whisking the whole time. Mix well. Then slowly add the egg mixture into the pot and bring it up to a slow simmer. Whisk continually. When the mixture thickens, immediately remove it from the heat. Incorporate with the butter and vanilla, stirring until the butter has disappeared.

Set aside and allow to partially cool.

1. In you kitchen mixer or large bowl place the cream and maple syrup. Whip until stiff peaks form.

2. Gently fold in bacon pieces. Keep cool until ready to use. 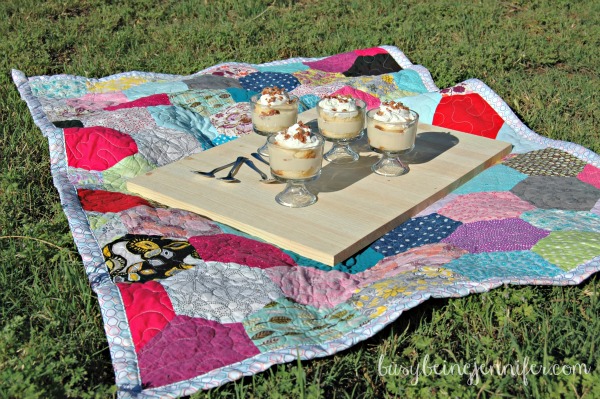 Now comes the fun part… well almost the fun part. Layer it all together in a dish of your choosing. You can do individual portions, as I did, or layer it in a large dessert dish. You can add the layers anyway you’d like, but I did cake, then pudding, a sprinkling of finely diced Tyson bacon pieces, cake, more pudding cover and allow to cool completely in the fridge. When you’re ready to serve add a dollop of the maple bacon whipped cream on top.

OK now the REALLY fun part, Eating! If you love maple, or you love bacon, this will pretty much be heaven in your mouth! My in-laws LOVED theirs… and they’re pretty picky eaters 🙂 Score one for the daughter-in-law!

I still have some of the Tyson bacon pieces left over… a little goes a long way. I’m thinking of making some pizza topped with bacon or maybe a chicken bacon fajita wrap for dinner… the possibilities are kind of endless!

What is your favorite food combination? Do you love maple and bacon together as much as I do?